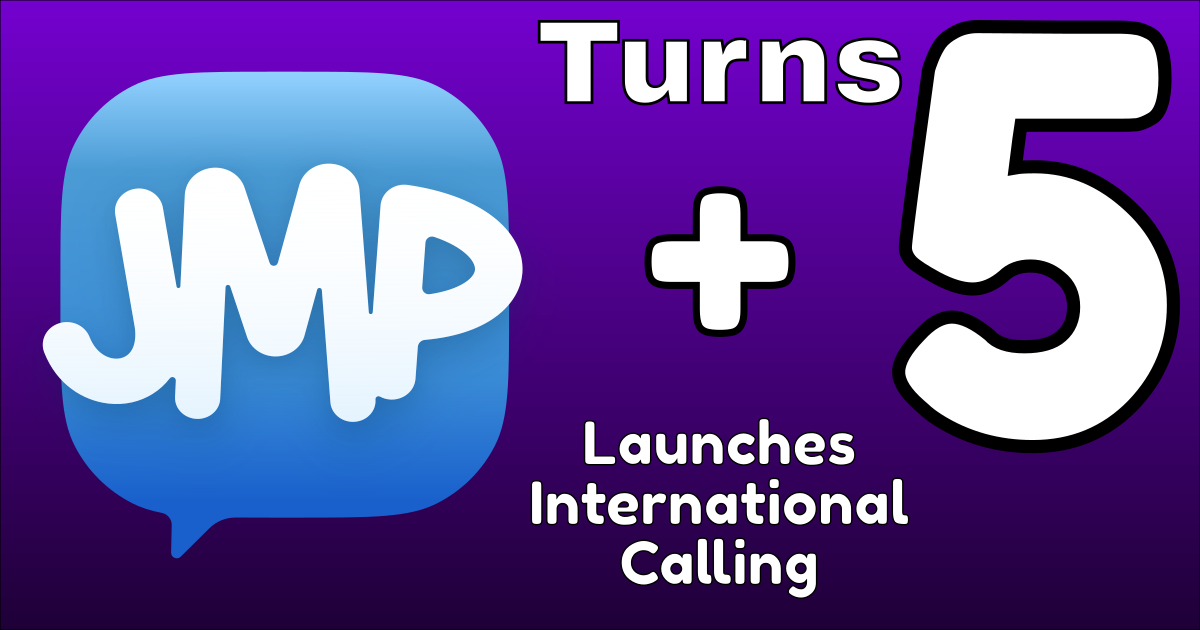 Welcome to the latest edition of your pseudo-monthly JMP update!

In case it’s been a while since you checked out JMP, here’s a refresher: JMP lets you send and receive text and picture messages (and calls) through a real phone number right from your computer, tablet, phone, or anything else that has a Jabber client.  Among other things, JMP has these features: Your phone number on every device; Multiple phone numbers, one app; Free as in Freedom; Share one number with multiple people.

Today JMP turns 5 years old!  We launched on this day in 2017 with a fairly basic set of features: bidirectional Canada/USA SMS and MMS, with incoming calls directed to a pre-existing phone number.  Since then we’ve kept pushing further and further toward feature-parity with the most popular mobile phone number providers, adding outgoing calls, international texting, and group texting.

What does this mean?  In short, we now support all the features that other providers of mobile phone numbers support: bidirectional MMS (including group texting), domestic and international SMS, and domestic and international calling.  So if you or your friends have been waiting to try JMP until we finished all these features, now is the time to get the word out and try it!

On top of international calling, we now support using as many minutes per month as you like (with 120 Northern America minutes worth of credit included by default) - see our new comprehensive pricing page for details.

You may be wondering: Where do we go from here?  Well, we still have much work to do, and many more newsletters like this one coming up to let you know about it!  There are two main areas of work left:

First, we want to keep our finger on the pulse of telephony, specifically making sure that we add any features that mobile carriers are adding to their phone numbers, like RCS.  If we find such a feature supported on at least Android and iOS, we’ll get it into JMP as soon as possible (for RCS, the rollout is limited, and only on Android so far - if you know of other phone number features we’re missing, reply to let us know!).  Also, we have not forgotten about the many kind requests we’ve received for JMP numbers outside of the USA and Canada.  Those are on our list!

Second, we want to make JMP as easy to use as possible.  There is still much work to do here, particularly on simplifying signups, adding and managing contacts, and group texting.  We want to make sure that group text threads are easier to follow, which requires a little bit of development work yet.  And we are actively working on improving the Cheogram app that many of you have started using on Android, to include these fixes and an easy way to signup for JMP.  In the not too distant future you’ll be able to install the Cheogram app, pick a JMP number from the app, and start using it right away.

In other news, Dino 0.3 has been released which brings with it voice calling features compatible with those used by Converations, Snikket, Movim and JMP! It’s still early days and so there may be some compatibility issues, but reports say the features are working for people.

Lastly, as part of JMP’s 5 year anniversary, we are unveiling our new logo today too!  You can check it out at the usual places, such as https://jmp.chat/ and elsewhere.  Our old logo (which is still live at its old location for the nostalgic) has served us well for the past half decade, and we appreciate all it’s done for us.  The new logo reflects how increasingly close we’re getting to JMP being easy to use for the average person, and hopefully our approachableness.

As always, we’re very open to feedback and would love to hear from you if you have any comments, questions, or otherwise.  Feel free to reply (if you got this by email), comment, or find us on any of the following:

Here’s to many more years of JMP!