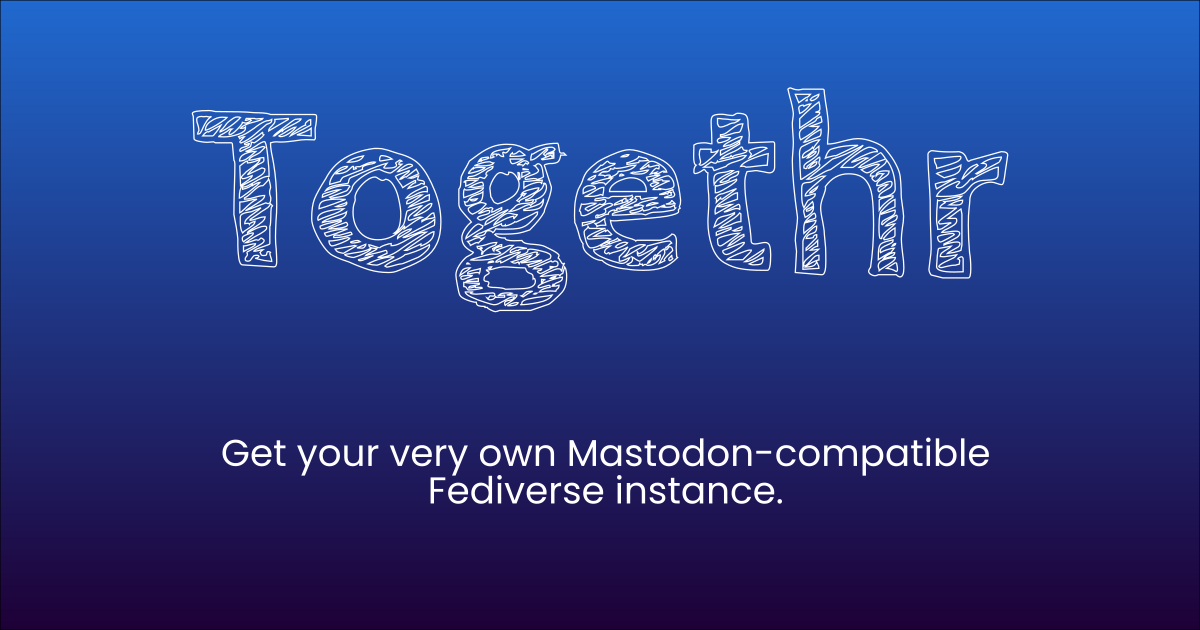 ﻿Last week we launched a sister product from the same team that brings you JMP: Togethr.  Why are we launching a second product?  Why now?  What does this have to do with the mission of JMP in particular, or the Sopranica project in general?

Togethr is a managed hosting platform for small Fediverse instances.  It is powered by the ActivityPub protocol that powers Mastodon, PeerTube, and so many others.  While there are several social networking solutions that build on XMPP (just like JMP does), and indeed we use one for this blog, we chose to go with something else for Togethr.  Does that mean we don’t have hope for XMPP in the social space?  No, rather it is an admission that the largest network for people to interact with in this way exists on ActivityPub-compatible software, and people need a solution they can use today.

As it grows, Togethr gives us the “skin in the game” motivation to bridge these worlds.  We are not the only ones interested in bridging the XMPP and ActivityPub worlds together, in fact the Libervia project is currently working on a grant to produce a first version of a gateway, that should be generally usable later this year.  We hope to eventually roll out an update that makes every Togethr instance seamlessly be both ActivityPub and XMPP without anyone needing to change their address.

Why not wait until “everything is ready” to go live with XMPP and ActivityPub at the same time?  Well, people need a solution.  Many people fleeing silos or otherwise being attracted to federated social networking find that self-hosting is too complicated, or they just don’t have the time to dedicate to it.  Many of these people end up creating an account on a giant volunteer-run instance, joining yet another silo (albeit a nicely federated one) run by admins they don’t know with financial and mental pressures they cannot understand.

Togethr gives people looking to federate their digital social networking experience full control without requiring systems administration knowledge or time.  Our team not only keeps the instance running, but provides support for users who may not be familiar with the software or the fediverse in general and need help getting everything set up.  However, there is no lock-in and people can easily move to another host or self-hosting at any time.  For example, if someone got an instance example.party and created the user person they would have address person@example.party just like you would expect on any Fediverse instance.  However, since they control the domain they could move to a different host or self-host, point the domain at the new instance, copy over their data, and no one has to “follow me at my new address”, everything just keeps working.

While we believe that single-user instances are the pinnacle of federation, Togethr does not limit the way people want to use it.  People may have family or friends they want to share posts with, who might not be motivated to join the Fediverse but will accept a personal invitation.  So every Togethr instance allows the customer to invite whoever they would like to join them on the instance, in order to smooth the onboarding for friends and family.  We hope that this can provide an option for people looking to take control over more of their digital life.