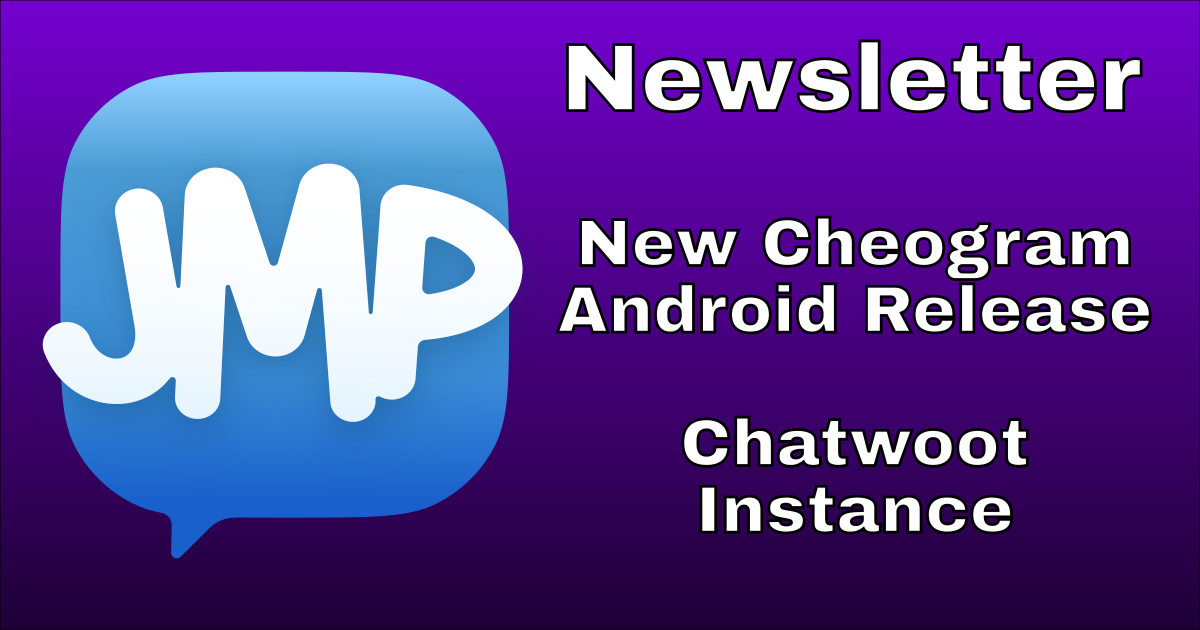 Welcome to the latest edition of your pseudo-monthly JMP update!

In case it’s been a while since you checked out JMP, here’s a refresher: JMP lets you send and receive text and picture messages (and calls) through a real phone number right from your computer, tablet, phone, or anything else that has a Jabber client.  Among other things, JMP has these features: Your phone number on every device; Multiple phone numbers, one app; Free as in Freedom; Share one number with multiple people.

October saw the release of Cheogram Android 2.10.10-3, the largest release in awhile.  The app now stores data de-duplicated, so if you send or receive the same file multiple times only one copy will be stored.  This also lays the groundwork for some new file transfer improvements that will be coming in the future.  The app also now supports displaying rich text messages sent by clients which support that (such as Gajim), including the image protocol needed to display stickers sent by Movim users.  A form of message retraction is also supported, and should work with most Jabber clients out there.  A reminder that message retraction is a social convention and not a security feature – the target still has a full copy of your un-retracted message if they want it.

We know lots of you have big contact lists, across multiple accounts, and that’s why this release introduces the ability to edit tags on your contacts and a tag navigation widget integrated into contact search: to make finding the right conversation just a little bit easier.  We would love to hear feedback about this UI and how well it works for you.

For those of you who start a lot of group texts, there is an easy way to do that built into the app now as well.  When you start a “private group chat” and select only @cheogram.com contacts, you will be prompted to ask if you meant to start a group text instead.  This flow seemed necessary, as many have accidentally created private channels with their SMS contacts instead of the intended group text, so checking at this point was likely to be necessary anyway.

There are also some smaller quality of life improvements in this release, including the ability to copy any link in a message to the clipboard (not just the first one), dumping app logs to a special directory on your device after every call in order to make debugging issues easier, asking if you want to keep app data on uninstall (to make switching back and forth to custom builds possible without always needing export/re-import), a new first-start welcome screen, performance improvements, and more.

As JMP grows so does our support load.  Up until this month we have been managing all our support requests using normal Jabber clients (mostly Gajim and Dino), which worked well enough but less and less well as we grew.  It would be hard to know if someone else was handling a request, who had previously handled a request, or even what the status of some requests were (if they had been resolved elsewhere in the public channel or otherwise).  We’re a small enough team that we can just talk to each other to solve these things, but that does take time, and more time as there are more things to talk out.  So this month we built an XMPP channel integration for Chatwoot and have migrated our main support infrastructure to a Cheogram-hosted instance.  So far we like this a lot, and so much we’ve decided to share.  If you have a project that handles support using Jabber (or SMS with JMP!) you can use it on the Cheogram Chatwoot instance.  Just come by the chatroom and let us know you’re interested.  Only the XMPP channel works on our instance for now, but we’d be happy to enable other channels as well if that would be useful.

And finally, we know many of you are excited about the JMP Data Plan.  Roll out to the waiting list has gone a bit slower than we hoped, but many SIMs did go out in October.  There have been some bumps as you might expect with any test phase, but overall things are looking good and we hope to speed up the roll out and even move on to the next phase soon.

To learn what’s happening with JMP between newsletters, here are some ways you can find out:

Thanks for reading and have a wonderful rest of your week!